The AGL Discs Baobab is an extremely overstable putt and approach disc golf disc. The Baobab sports a unique set of flight numbers at 4/0/1/3. This disc does not like to fly and when it does, it likes to fade hard. No one term can quite define the Baobab but it has quickly become a favorite among those who have thrown it. The Boabab features a top bead and flat top making it comfortable to throw both backhand and forehand further increasing its versatility. Whether you need a long putt to fall quickly to avoid trouble, need a tight s-curve flight, or just need a disc to dump hard the Baobab will take your approach game Above Ground Level.

Such a weird design/shape/feel – but what it all adds up to is pure $$$ ! You can rely that this disc will stay put. It has ZERO glide but an immense turn and fade, so that it practically turns out of an anhyzer THE MOMENT YOU RELEASE IT! It is beefy! 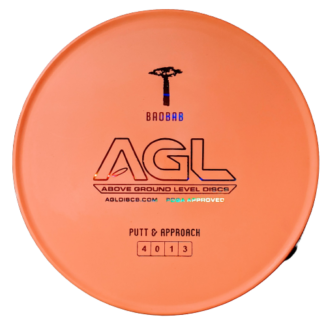